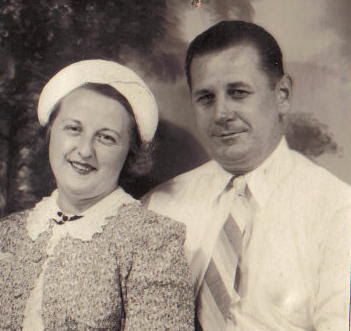 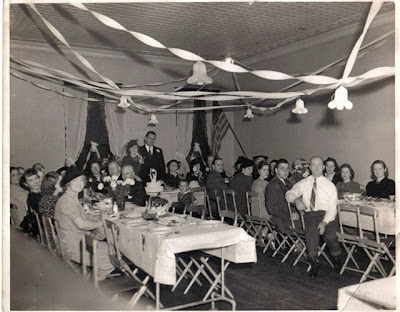 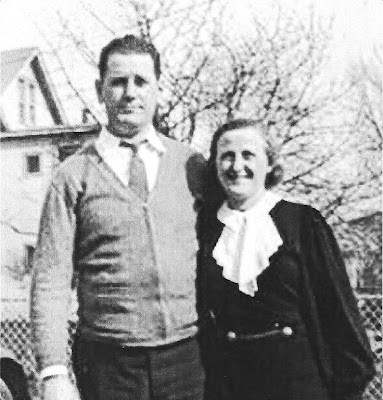 Harald Ditlev Eltzholtz, the second child born to Harald Louis Adolf and Mary Kate (Egan) Eltzholtz was born May 2, 1902 at Cedarhurst, L.I., NY and met his grandfather Ditlev with his father when Ditlev visited his 2 sons in USA late in 1905. Harald chose plumbing as a career and spent most of his life in the Montclair, NJ area.
.
Harald met Frances Anna Germaine sometime during the 1929 - 30s and they married on October 5, 1939 following a lengthly courtship. Mary Frances Eltzholtz Middleton identified those present at the reception as follows: To Harald's left side was his mother Mary Kate Egan Eltzholtz, then his sister Elizabeth (Dee Dee), then his brother and the twin to Elizabeth Edward (Bo) Eltzholtz, then his brother Joseph (Whitey) in the white shirt/tie. The young boy sitting in front is my cousin Billy Eltzholtz (age 4yr.) He is Peggy Dietrich's brother, Whitey's son.
.
The woman to the right of my mother is her mother Mary ("Mamie") Germaine. The man in front of her is my uncle, Jack Sweeney (Husband of Madeline Eltzholtz Sweeney). I believe my aunt Madeline (Harold's sister) is the woman who appears opposite Jack Sweeney at that table (she is partially cut off, and is wearing a light colored dress). The rest as far as we can determine must be friends.
.
A baby boy whose name is unknown was born and died in 1945. Mary Frances Eltzholtz was born April 20, 1947 and Jacqueline Ann Eltzholtz was born November 28, 1948. An adopted daughter Virginia Eltzholtz was born February 5, 1962.
.
Harald Ditlev Eltzholtz died April 26, 1969 and Frances Anna (Germaine) Eltzholtz died February 2, 1987.
.
Bill Eltzholtz
.
(Photos: The casual photo of the couple circa 1934 - 1936, The wedding photograph and the photo of the reception, 1939)
Posted by Bill (DollarBill) Eltzholtz at 12:11 AM

It is great to see this picture of two wonderful people! I have very fond memories of spending time with my Aunt Frances and my Uncle Harald... both were very caring and loving and I always looked forward to visiting with them and my cousins,Mary Frances and Jackie.
Thank you to who ever posted this photo... it is so good to see them again. 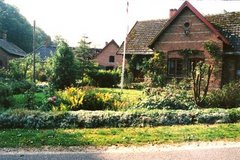